History of Waqf Board

After the enactment of the Central Waqf Act 1954, the Hyderabad Government formulated Waqf Board in 1955. This Board had its jurisdiction throughout the state including Marathwada which was part of Hyderabad State. After reorganization of Hyderabad State i.e. since 1956, the Waqf matters relating to Marathwada was supervised by a Regional Waqf Committees which continued to function under Hyderabad Waqf Board. This practice was continued up to February 1960. When the Maharashtra Government formulated Waqf Board for the implementation of Waqf Act 1954 to Marathwada, the Board was entitled as “Marathwada Waqf Board”.

Accordingly the Waqf Board in Marathwada Region was functioning as stated above since March 1960. The Board continued to function till 6th March 1979. Due to complaints etc. the Government of Maharashtra superceded the Waqf Board and the Divisional Commissioner Aurangabad, Division Aurangabad was appointed as an Administrator. This state of affairs continued up to 9th November 1984.

The Waqf Board in accordance with the powers vested in it, established District Waqf Committees at each District, which were again headed by District Chairman and Members by nomination under Section 10 and 11 of the Waqf Act. There was also Secretary to the Board who was normally taken on deputation from the cadre of either Deputy Collector or Tahsildar from the Revenue Department. The Secretary exercised administrative control over the administrative machinery of the Board and implemented the decisions taken by the Board. The Secretary was assisted by staff at the Headquarter and District level appointed as per the provisions contained in (9) and (10) of the Marathwada Waqfs Rules 1961. The Waqf Act 1954 was therefore applicable to the Muslim Institutions only in Marathwada Region and also to the Rajura, Manikgadh of District Chandrapur, which was originally a part of erstwhile Hyderabad State, where the Waqf Act was made applicable by Ex-Hyderabad State. 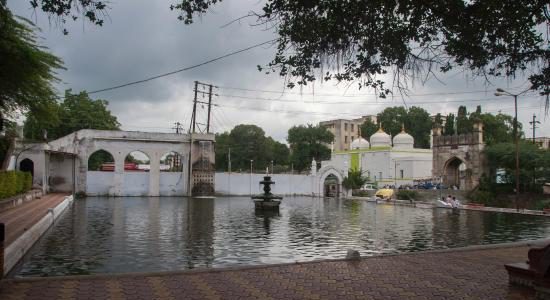